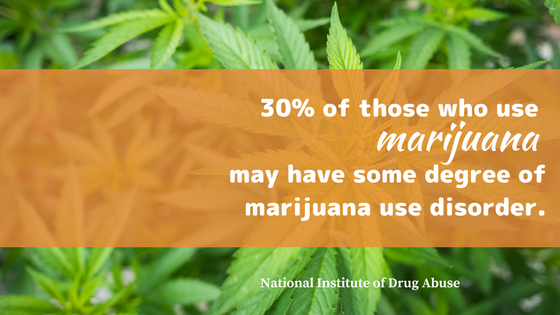 Cannabis is now legal for medical use in 29 states, and for recreational use in nine states and the District of Columbia. Yet cannabis is still considered a Schedule I controlled substance under federal law. So, does that mean it's safe to use? Is it addictive?

Contrary to popular belief, cannabis dependence is similar to other substance use disorders. Cannabis use can impair memory, learning, mood, and social behavior. Prolonged use can interfere with family, school, work, and other activities. People with marijuana use disorder, especially adolescents, often suffer from other co-occurring disorders and also use or are addicted to other substances.

Treating cannabis addiction is very similar to other addictions, and several evidence-based behavioral therapies can help reduce marijuana use.

In clinical trials, a combination of cognitive behavioral therapy, motivational enhancement therapy and contingency management have produced the best outcomes.

Cognitive-behavioral therapy is a psychotherapy that focuses on strategies to help people change unhealthy thinking and behaviors.

Contingency management is an intervention for marijuana use disorder that involves frequent monitoring. This type of behavioral contracting provides incentives for desired behaviors like clean drug tests and penalties or sanctions for undesirable behaviors.

There are no FDA-approved medications specifically for marijuana use disorder; though some psychiatric medications have been shown to decrease symptoms of withdrawal. Studies and small clinical trials are underway on drugs that may help with withdrawal and reduce the rewarding effects of THC, the primary psychoactive component of cannabis.

Cannabis is the most commonly used illicit drug in the United States. Last year, more than 4.2 million people over the age of 12 met the criteria for a substance use disorder based on marijuana use. It's important to stay informed on changing policies and the most current research on treatments for cannabis use disorder.

Learn more about medical marijuana in our on-demand webinar: Is This What the Doctor Ordered?